2 days of excellent weather for learning to climb ice. 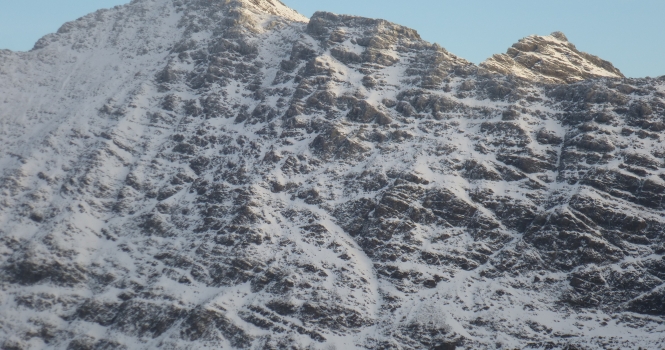 Simon has finally squeezed the ambition of winter climbing into his hectic schedule of fell running, cycling & blowing up molecules (or something like that). In 2013 we had an exciting time climbing a route we called Broken Windows on Window Buttress so I knew he would be up for an adventure. XC forecast good weather until midday so I mooted a criminally early start.

I’d spotted a huge lump of ice on Friday so yesterday we aimed for that, fully armed with screws & screamers. We left the beach shortly after 5 and, as dawn broke, the icefall appeared but only half the man it had been. On closer inspection the remaining ice was clearly the best kind, grey and thick and still very much attached and my hopes rose again. I placed a screw then dashed past the cold shower (steep but on on perfect placements) for a closer look at the open book corner above. Sadly the nice ice ran out and this project came to an abrupt end. Looking down from my high point

Off to the right more ice led up to a good rock crack and offered an opportunity to give Simon his first go at swinging axes, even if we weren’t going to get to the top. Admittedly I got drenched while belaying but it was a good teaching exercise as Simon discovered the nuances of good/bad ice, how hard to hit, how to get the axes (and a screw) out. More importantly he learnt that it ‘s still all about the feet and discovered just how little a kick his crampon points needed in order to stay put. We finished our 8-hour day & were back in the pub by 2 and the forecast bad weather eventually set in by 4.

All this set us in good stead for today and I was hopeful Foxes Rake, one of my favourite routes, would offer us some ice. We were joined by Ally (you’ll recognise the grin) for a very civilised 7am start and the rain had cleared through as predicted. As the light arrived The Smear and Icicle Factory ice shone big and bold above us (nowhere near complete but definitely fat where they had formed). Foxes also had some great looking sections but looked thin at the crux especially. I toyed with the pros & cons; the route had never looked so huge & alpine before. Knowing that good rock anchors are sparse exaggerated the seriousness, escape if the crux was too thin was going to be “interesting”. I decided Upper rake would be a better idea but would reconsider as we passed the start of Foxes. From closer up I realised there was far more ice and it all looked delicious again. Temptation got the better of me & up we went, moving together for the first 150m, moved in shortpitches for another 100m then got both ropes out for the beautiful wide ice pitch below the crux. A bombproof blade belay increased my optimism hugely as I studied the crux that I knew had very little protection. A positive mentality definitely helped as no cracks apeared for protecion. After some balancey steps a narrow groove offered up thicker ice and just enough excellent placements to keep things calm. The cave offered up 3 “better than nothing” runners but the solid line of immaculate ice above was the real source of safety. 25m above, and running out of rope forced me to leave the joyous medium for easier angled snow but we still managed 2 more pitches of indulgence after this.

The route ended just on cue as snow & hail suddenly whipped around us on the latest weather front. Descending back below Deep gash Gully we found fresh fox prints emerging from a dry cave and Simon even glimpsed him heading off into the murk; a fitting finish for a foxy day.

Apologies for no photos in the text but the images are refusing to be rotated. Hopefully the right way around in the gallery below.