Silver Fox V,5. First new route of the season is a cracker. 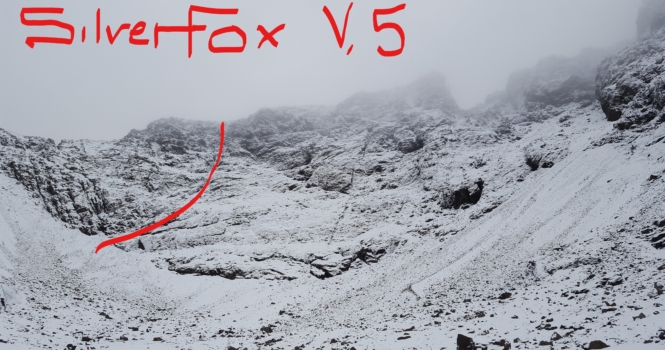 An extra bit of motivation is always handy in winter so a new climbing partner, and Cuillin winter virgin at that, was very welcome. Bla Bheinn on Thursday had shown that the snow was very powdery. As we headed into Coire Lagan I was looking for something to climb that would still have some of that rain from earlier in the week holding the snow together. Old favourites on Thearlaich BC Buttress were tempting but the long slog up a powdery Stone Shoot was anything but.

I’ve had a long curving fault line from the corrie floor to the crest of Sgurr Mhiccoinnich on my radar for many years. It has a steep and intimidating finish that had put me off so far but my new partner has climbed with some auspicious partners and I didn’t want to disappoint. Taking in the views from the easy lower slopes.

We soloed up some pretty rough and rocky ground for the first 60m until a short corner suggested a rope may be wise. Things got surprisingly steep soon afterwards so the 2nd rope and full concentration were the order of the day. This flip into action sadly means there aren’t many photos but here is Sophie topping out at the end of what turned out to be the crux pitch. Another long and absorbing pitch followed with just the right combination of protection, hard won hidden hooks, turf, gymnastic manouvres and even some quality snow and ice. Entering the bowl below the intimidating exit grooves things were getting distinctly gloomy as the light faded and wet snow drove into the face. Studying the possibilities as I took in the rope I reckoned a crack in the rock face above looked like my best hope of reaching the top and still making the evening dinner dance appointment. If it proved too hard or slow it would just have to be defeat and a multiple abseil descent. Fortunately the rock was wonderfully solid gabbro and everything came together even better than I could have hoped. High fiving on the crest was followed by a rapid pack and scary traverse along the deeply powdered summer line. Bum sliding the An Stac screes was a brief respite but I managed to lose us on the exit from the corrie as snow drove into the face (poor excuse!).

We bid farewell, I made the main meal thank goodness and its only been through today that I’ve fully appreciated quite what a quality climb we had done.

Sophie’s own account gives a more eloquent description and more technical details for the climber. Personally I found the route “thought-provoking” the whole time!

Mike Lates and I went up Coire Lagain to have a look at an unclimbed basalt dyke line on Sgurr Mhic Choinnich.
It’s four or five pitches of superb climbing. The basalt is not always very helpful, and there was a whole lot of powder but there wasn’t a whole lot of ice. You repeatedly find yourself with your back or your right shoulder wedged into a bottomless left-facing corner, often undercut and overhanging, with plenty of right-hand hooks and placements in the depths of the corner (but careful–it’s loose in there), and bugger-all out on the sleek basalt powder-covered slabs to your left, which are only too solid. Footwork needs to be good, and tends to involve a single teetering crampon-point striking sparks out of some tiny rounded nubbin. As Mike said, it’s all about opposing forces. Bridging is your friend here. Foot-jams, knee-jams, elbow-jams, thigh-jams, pack-jams and full-body-jams were also deployed. So quite thought-provoking at times, and generally speaking much harder than it looks– till the much more user-friendly gabbro kicks in on the final pitch, which is the steepest and most fearsome-looking bit of the whole route, and nowhere near the hardest bit. The conditions were excellent. Not everything was frozen at the bottom, but it most certainly was at the top. There was heaps of snow already when we left the car park at dawn (8am), and plenty more had fallen by the time we got back there (7pm–so a short day in the Cuillin). While we were climbing we had two clear spells and two snow-showers.The second clear spell had actual sunshine–great for me as belayer, less good for Mike as leader. Standing on belay in the sunshine at 2500ft in knee-deep snow, looking out over Coire Lagain to Loch Brittle, over Canna and Rum and Muck, to Pabbay and Mingulay and the infinite ocean beyond: this is not something I will forget in a hurry.
Mike’s seen these conditions hundreds of times before, of course, but this is my first winter day ever in Skye. We were talking animals–he told me how when he did the Cuillin traverse in winter he was following a fox’s footprints all the way from Gars-Bheinn to Gillean. (Bruach na Frithe to Gars bheinn ML)
So it turned out the route was actually a completely brilliant day’s climbing. Not optimal conditions, sure, but way above the minimum acceptable. Mike led it like a boss, and I got up it with the odd wobble and squeak, but without actually falling off anything. And then on the walk-out we had a nice little botanical ramble in the dark. As you do

🙂
After all the pessimistic and sceptical meteorological banter on Facebook the other day about slush-covered rubble and unfrozen turf, and how there was nae chance of a decent climb anywhere this Saturday, let alone in a south-facing corrie in Skye, there was only ever one possible name for the route. After plenty brainstorming from us both during the day–slightly held back for most of it by the fact that until well after sunset we didn’t know for sure we were going to finish it–Mike finally nailed the name at the top of the walk-off… It is of course The Silver Fox**, 235m, V, 5.