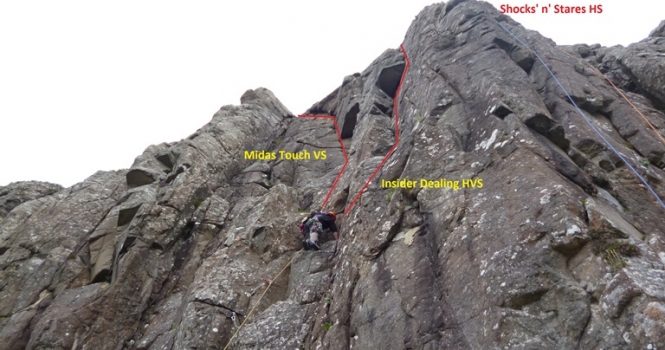 Celia has climbed on bolts to a high level at home in Calgary and today had her first taste of climbing with traditional gear on the delightful dolerite at Neist. After warming up on Sonamara & Baywatch we moved over to Financial Sector where Matt, Beads & Murdo were already playing on Midas Touch. We took their recommendation and first climbed this superb 25m VS. It deserves all the stars that it is given in the new seacliffs guidebook. Out to our right Murdo was pointed at Shocks’ n’ Stares as a suitable route for him to lead and he made an impressively small amount of fuss.

Beads in a great position on Shocks’ n’ Stares

As we abseiled to the bottom for our next route it started to spit with rain but the craic was still good on the ground as Matt was engrossed in the crux moves of Terminal Bonus. We opted for the right hand twin route to Midas Touch, an HVS called Insider Dealing. The climbing was just as good and both Celia and I finished before the rock got too wet. Pure Dead Brilliant!