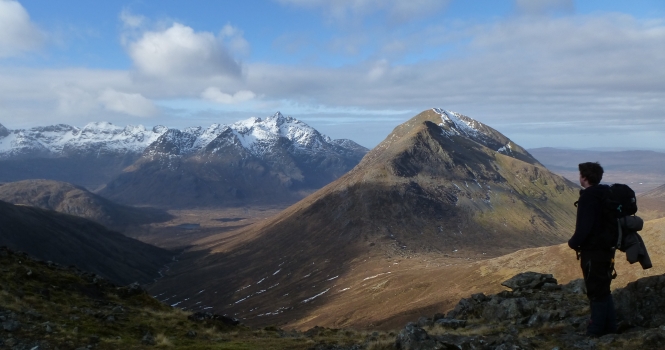 2 days of intense wind & rain finally eased off yesterday morning and it was time to go and see what conditions were like. Parking for the beautiful peak of Garbh bheinn is just a  2 minute drive from home at the head of Loch Ainort.

We opted against the north face because we reckoned that the snow would be very soft after so much warm weather. Retrospectively this seems not to have been the case as the old snow fields are so well consolidated that they are still a good consistency. An hour of walking up the Druim Eadar da Choire took us to the hill marked with a spot height 489m on the Harvey’s map; there is a local name for this wonderful viewspot (a best on Skye contender for sure) but I’ll have to write it down next time I remember to ask the crofters. The Main Ridge was clear and showed the crest to be well plastered still along the entire length. Undoubtedly some exposed rock sections but very, very wintery still! The dip at point 429m just below is the geological boundary between the Red and Black Cuillin and the cliff of black gabbro can clearly be seen sitting on top of the more rounded red granite hillside. For another hour we all indulged in as much scrambling on the hugely crystaline gabbro as we could find with a fine narrow crest as a finale. The view of the ridge from Clach Glas to Blaven from here is uber classic; great background for the team pic! We’d planned to descend north-east towards Belig but the hard/sugary snow interspersed with rock-hard turfs looked far too serious for such a relaxed day out with friends so we retraced our steps and were treated to some wonderful mist and light effects out to the west. Recovering from the re-rise to pt 489 and taking it all in Mark’s jaw hit the flaw and he gestured horizontally out over our heads; we all dived for cameras as quietly as possible as a mature golden eagle circled around and slowly upward. Seeming to change his mind he suddenly folded the wings and soared down past us and settled amongst the boulders not far from where we had just descended. Magnificent display thankyou!