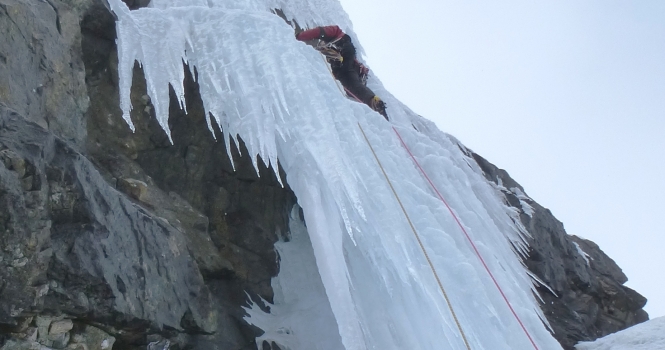 We managed a perfect finish to a brilliant long winter on Friday by climbing The Smear, the longest steep icicle in the Cuillin and probably only the 2nd ascent ever. The ice was utterly perfect from bottom to top but still needed a fantastic explosion of effort from Andy to lead the very steep start. The climb was originally given grade V when V was the highest Scottish grade but we both agreed that it warranted grade VI by modern standards.

Two 45m pitches seemed to pass almost too quickly but the grins said it all for the rest of the day. Things weren’t all glorious; a load of fresh overnight snow was sloofing off regularly from left right & centre. The “walk off” down the Upper Rake involved descending dangerous quantities of deep fresh snow lying on a very steeply banked terrace and probably more complex rope-work than the climb itself! I first went to the foot of The Smear in 1994 but I’ve never seen it anywhere near climbable until this last week. Andy is sailing back to Australia this summer so such a notable bit of Scottish ice is a great Swansong. Looking forward to borrowing his tools & screws for the next few winters:)

The Smear was first climbed by Jim Duff & Doug Scott back in 1979. Doug Scott below The Smear in 1979

To my knowledge the route hasn’t received a second ascent since; zooming in on Ginger Cain’s photo it looks like Doug Scott had been on the Red Bull to get up the first 10m as the icicle fringe doesn’t even appear to be touching down. We are currently taking bookings for the spring & summer season 2021

Accommodation should be your first priority before arranging guided days.  We have two self catering cottages in the small village of Luib 7 miles north of Broadford and all rooms at our bunkhouse, Skye Basecamp, will have either en suite facilities or a private bathroom allocated to your room and the self catering kitchen will be operational with social distancing.  Skye Basecamp is in the heart of  Broadford & will be home to our guides over the summer months.