Flying high with the eagles 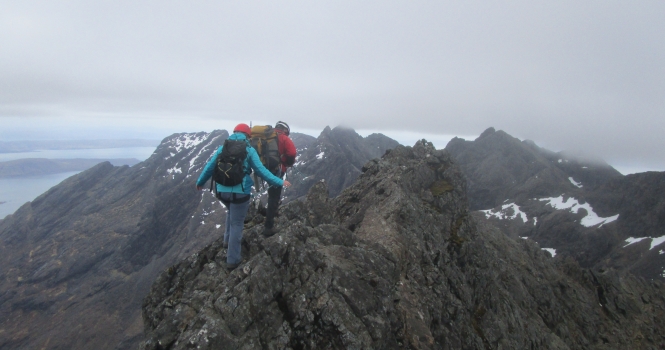 Lizz had never done any scrambling before but an adventurous and athletic atttitude saw her balancing confidently along the knife-edge crest of Ghreadaidh today.Thanks to Iain who was out shadowing with us for taking these great images. For some context I’d estimate that only 1 in 50 folk I guide along here have the bottle and skill to pull it off with most folk taking the safer hands & buttocks-on option! The knife-edge only lasts 10 minutes when done in such good style and we were soon  heading down on easier ground but opting for the crest wherever possible. Almost as a reward we were treated to a sight I’ve never had before with a flock of 8, yes 8, white-tailed eagles rising on the thermals from below us. Footage on the go-pro shows that this display lasted for over quarter of an hour before they rather spookily rose up into the cloud base 500 feet above us and disappeared in an instant. The sight was spectacular but also gave me an uncomfortable feeling- these birds are just so huge and gregarious compared with true mountain royalty, the Golden Eagles. Goldies are failing to breed with anywhere near the same success as they used to here on Skye in the 90’s and I certainly see them less frequently. The causes are multifold and funding towards research is,  as far as  I’m aware, very minor. I’d like to see some of the enormous quantities of money spent on the White-tailed eagle flagship directed towards working out how to slow this decline. An aging population has reduced fertility and I’m aware of my own guilt with ever-increasing numbers of hill-goers inadvertently distrurbing these shy birds by venturing too close to their nests. However, having a bigger bird that eats largely the same diet and needs similar sized territories reintroduced to their Skye stronghold has undoubtedly had a big impact. The RSPB line is that the 2 species don’t compete directly with each other and there are certainly shots of both species feeding from the same deer carcass. It is hard for me, however, not to envisage the “gang” we saw today, completely frightening a goldie off any prey. We continued our traverse to Banachdaich and these ranting thoughts subsided as concentration on footwork absorbed me once more. The clouds burnt off and half an hour was easily wiled away on the summit before a quick descent to beers while legs were soaked in the cool pools.