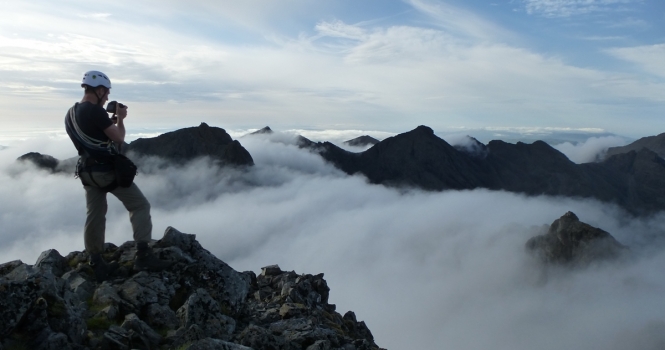 We can provide advice, guiding and crew for photographers, both amateur and in the TV and Filming industry.

The unique quality of light and scenery on Skye makes it a visual Mecca for the arts community, both amateur and professional.

Mike Lates spent nine months working with the celebrated mountain photographer Gordon Stainforth. His book, The Cuillin is the best-selling photographical result. It is widely regarded as the authorative text on both the historical and modern climbing in the best mountains in the British Isles. Guiding and advice on lighting, timings and positions for stunning photography results are available at Skye Guides. Tents, sleping bags, props and models can all be provided; just ask!

For directors and producers with an eye for more ambitious film projects location advice, sourcing of props and extras and location management is available. Skye Guides Limited employs professional mountain guides and/or IRATA-qualified rope access technicians in all work at height locations to cover Health and Safety regulations. Risk assessments  are provided for all contracts.

Researchers please note that location advice will only be discussed once a contract is agreed.

GORDON STAINFORTH “THE CUILLIN” – May 1993–April 1994
Main assistant in production of this classic modern “Bible” of the Cuillin of Skye.