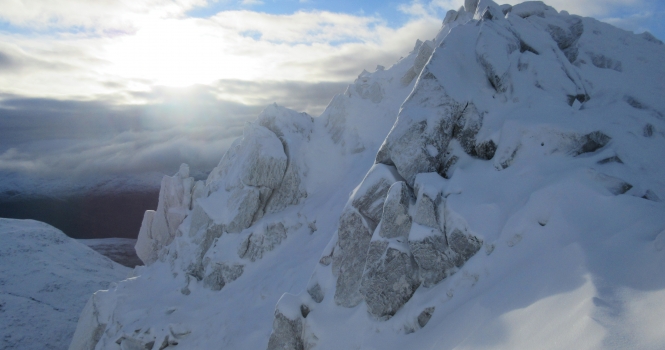 Had great fun introducing my good mate Innes to the joys of winter climbing yesterday and the weather gods treated us to a classic. The forecast had been for heavy rain/snow for most of the day but nothing came of it at all.

Now Innes built a lot of the Black Cuillin footpaths and has explored many of the peaks and ridges in that time. Instead he fancied Glen Shiel, having driven through it so often but never left the road.

A big part of the joy of the day was listening to the commentary- Innes was being blown away by every aspect of our environment. “It’s so 3-dimensional” was a comment really early on as the clever stalkers path weaved upward eventually revealing the hidden maze of glens beyond. We left plans open but I reasoned that, if we were going to carry the crampons, rope etc we should aim for a route where they might actually be needed so the Forcan Ridge it was. I’ve done it many times but it never disappoints with progress often complex and time-consuming. Top pupil donned the harness although I sensed an element of doubt about any need for it as I coiled the rope in preparation. Heading to the foot of the first slab Innes was hard on my heels and the beast was momentarily unleashed only to watch me fail miserably getting up the opening groove. A rising zig-zag left us no choice but to balance across the groove 40ft above the ground and the need for rope became obvious. The lad grew very fond of that wee bit of string over the following couple of hours! The aesthetics were great but the pics don’t show the brutal hard work. Every inch was hard fought for but, as Innes pointed out, it kept the mind off the drop. After an hour or so in the mist, things began to get distinctly brighter until we were suddenly in bright sunlight and the mists dropped off the ridge running away in front of us towards the Saddle. Top of Sgurr a Forcan with The Saddle appearing out to the north.

It was already close to 2pm when we reached the summit of Sgurr a’ Forcan so an easy decision to head down immediately beyond. Now the bumslide descent from the Saddle is such fun it justifies the effort almost every time in winter but I hadn’t told Innes because I hadn’t been sure about the short-cut we were about to take. A foot of powder is a great cushion though and the run-out was clear so I armed the lad with an ice -axe, gave him a brief lesson then set him free while I packed the rope. He was off like a shot and I was greeted by a cheshire cat-like grin 400 feet lower as Innes admitted the descent had been particularly troubling him whenever he made the mistake of thinking about it! With the tension released the eulogising really began in earnest; pretty sure I’ve another good keen climbing partner well broken in. Looking back at where we’d been. The Five Sisters of Kintail beautifully highlighted in the evening light

Thanks for inspiration for a great day out Innes!